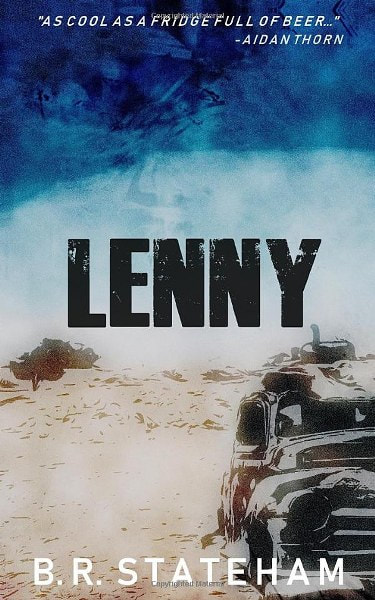 Lenny has stared death in the face many times, from the jungles of Thailand & Vietnam to the mountain passes of Afghanistan. Now after a career of service he’s back in his hometown of Ballard, Texas looking for what comes next. Sheriff Greene knows an asset when he sees one and it’s not long before he signs Lenny up as his new deputy in the fight against the narcotics cartel that has over-run their quiet border town.20 years in the army have taught Lenny never to underestimate the things people are capable of but as the bullets begin to fly and the casualties begin to mount it’s just possible that his investigation may bring him closer to home than he ever expected.

“Cooler than a fridge full of beer…”“

This is modern noir at its very best…”

“B.R. Stateham is at the top of his game right now…”

“Lenny may be the best thing B.R. Stateham has ever written, and as readers of his work will know, that’s quite a high bar to hit.”

“B.R. Stateham has created an action packed tale - another winner from Fahrenheit Thirteen…”

B.R. Stateham is a fourteen-year-old boy trapped in a seventy-year-old body. But his enthusiasm and boyish delight in anything mysterious and/or unknown continue.

Writing novels, especially detectives, is just the avenue of escape which keeps the author’s mind sharp and inquisitive. He’s published a ton of short stories in online magazines like Crooked, Darkest Before the Dawn, Abandoned Towers, Pulp Metal Magazine, Suspense Magazine, Spinetingler Magazine, Near to The Knuckle, A Twist of Noir, Angie’s Diary, Power Burn Flash, and Eastern Standard Crime. He writes both detective/mysteries, as well as science-fiction and fantasy.