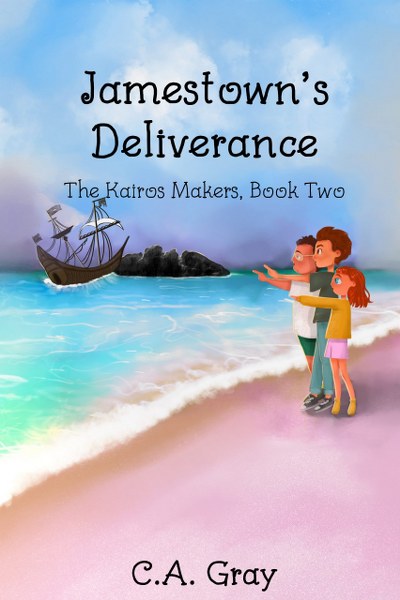 Fresh from their brief adventure to colonial times, Gabe, Elizabeth, and Marty receive their next summons from Thrylos, warning them that this will be a longer adventure, and to pack appropriately. Not knowing what ‘longer’ means, the kids do as they’re told, and arrive on a deserted island in 1609, just in time to see a shipwreck on the reefs!

It turns out that the ship is called the Sea Venture, and it was originally bound for the colony of Jamestown, Virginia. The deserted island is called Bermuda, reputed at the time to be surrounded by monsters. All the passengers of the Sea Venture survived the wreck, including one dog whom Elizabeth happily adopts, but the ship itself did not. Gabe, Elizabeth, and Marty find themselves stranded with the would-be settlers as they build two new ships and learn to survive off the land.

Nine months later, when the kids are really starting to wonder what they’re doing there, they finally set sail in the new vessels for Jamestown—only to find that the remaining settlers there are at death’s door! The kids learn from a mysterious prophetess that a resupply ship from England is on the way. But the crew of the original Sea Venture doesn’t know this; they consider the colony a lost cause, and they are on the verge of returning to England and letting it fail. Can Gabe, Elizabeth, and Marty convince them to just hang on in Jamestown for a few more days, even when it looks like all is lost? 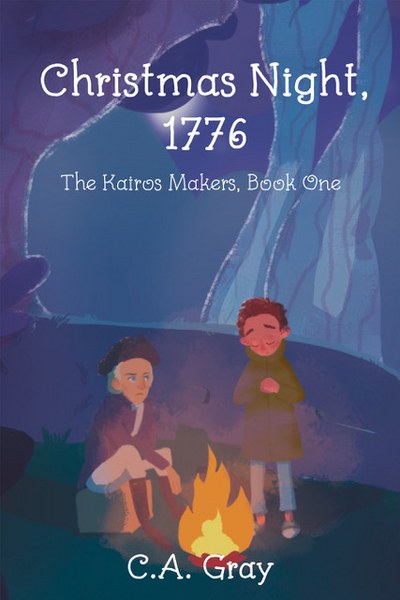 Ten year old Gabriel Jordan always wanted to be a magician. He just isn’t very good at it. His godmother writes to a mysterious traveling magician named Thrylos and begs him to visit Gabe, just to encourage him. To her surprise and Gabe’s, Thrylos does so—only it turns out that Thrylos doesn’t just do “magic tricks.” He’s a real magician, and he offers Gabe a magical adventure—any adventure—of his choice.

Gabe thinks long and hard about this. Because Gabe’s godparents adopted him when he lost his mom and dad, he knows what it is to be sad, and to need something exciting to cheer him up. So he tells Thrylos when he returns that he wants to give his adventure away to another kid who needs it more than he does. Thrylos is so impressed with Gabe’s unselfish choice that he offers to make Gabe his apprentice instead. Thrylos reveals that he is a time-traveling magician, and he travels throughout history to various critical, kairos moments in time to make sure they happen the way they should. But he can’t do it alone. Gabe asks if he can bring his adopted little sister Elizabeth and his bookish friend Marty as apprentices too, and Thrylos agrees.

Together, the three kids travel to Christmas Night, 1776: the pivotal night of the American Revolutionary War. Whether or not America ever becomes a nation hinges on General George Washington’s decision that night, when it seems like everything has gone wrong. Can Gabe, Elizabeth, and Marty convince General Washington to press on in the face of incredible odds? The fate of the future United States of America hangs in the balance!

C.A. Gray is the author of three YA Amazon bestselling trilogies: PIERCING THE VEIL (magic and quantum physics meet Arthurian legends), THE LIBERTY BOX (dystopian metaphysics and mind control technology), and UNCANNY VALLEY (dystopian coming-of-age with neuroscience and super intelligent A.I). She starts with some scientific concept that she's interested in learning more about herself, and then creates lots of epic chaos and high-stakes action to go along with it. Her stories are free of gratuitous violence, language, and sexual content, and she abhors depressing endings... but they're not all kittens and rainbows either! She also listens to and reviews audiobooks on her website (www.authorcagray.com), Goodreads, Instagram, and on her podcast, Clean Audiobook Reviews, where she also occasionally interviews other authors.

By day, C.A. Gray practices naturopathic medicine, podcasts, and writes medical non-fiction under her maiden name (Lauren Deville). She lives in Tucson, AZ with her husband Frank, and together they maintain an occasionally contentious film review blog (under her real name: Lauren Baden. Three names. Yes.) She's kind of the queen of multitasking--so in her spare time, she creates whatever meals or crafts she found most recently on Pinterest, drinks lots of coffee (Aeropress btw) and occasional wine (reds--and she saves the corks for craft projects), works out (while listening to audiobooks), and studies the Bible (about half of the podcasts on Christian Natural Health are scripture meditations). ...She does sleep, too.

Join her newsletter for best-of-the-month reads, freebies and giveaway information, as well as new releases! http://eepurl.com/F3rof